A PLACE TO GO: Heroic and Powerful – Jurong Town Hall

Tan Kok Hiang, principal director of Forum Architects, lets us in on what it takes to restore Jurong Town Hall, an icon of modern architecture.

Jurong Town Hall was very heroic and powerful. It had something to say,” says Tan. In 2017, his firm, Forum Architects, completed a detailed restoration of the iconic Jurong Town Hall, which has become a significant landmark and symbol of Singapore’s successful industrialisation efforts.

Completed in 1974, Jurong Town Hall served as the headquarters of Jurong Town Corporation (currently known as JTC Corporation) formed in 1968 to spearhead industrial growth. A site was chosen atop an 80-foot-long hill commanding sweeping views of the area and a design competition was held in 1969. The winner, selected from 34 entries, was Architects Team 3 led by pioneer architect Datuk Seri Lim Chong Keat, who designed many significant buildings in the 1960s and 1970s including the Singapore Conference Hall. 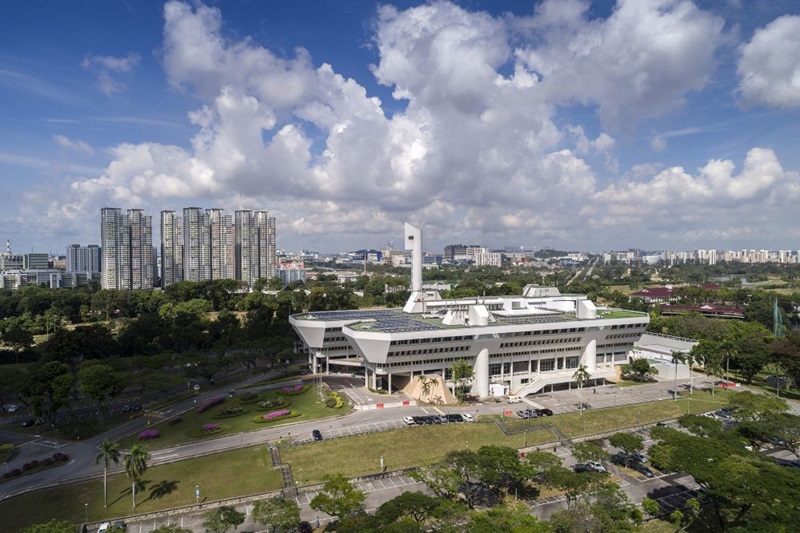 The building’s sense of gravitas comes from its brutalist design, an extension of modern architecture known for massive, unadorned and unpretentious structures built from raw concrete. Lim Chong Keat also added nautical design elements – from the outside, the cantilevered upper storeys gave the building the appearance of a ship’s hull and the tall clock tower, a mast.

Jurong Town Hall is a product of an exceptional period in our history, and its architecture captures the spirit of an era when our pioneer generation was boldly imagining and developing the future of Singapore,” says Ng Lang, CEO of JTC Corporation (2017 to 2020). “Even today, it stands as an innovative landmark embodying what the JTC spirit stands for.”

In 2000, JTC moved to the JTC Summit, and the building was renamed iHub in 2004 to attract start-up technology companies who needed affordable office space. Upper levels were subdivided into many units until 2005, when Jurong Town Hall was gazetted first as a conserved building before it was designated as a national monument in 2015. Since 2017, it is a hub for trade associations.

To peel back the layers of history, Tan and his team found information and inspiration from a surprising source: old copies of the Singapore Institute of Architects Journal which had detailed coverage of the competition and original photos. He also met a long-time JTC employee, who regaled the team with stories about the old building. The result is a masterpiece that continues to reflect the spirit and essence of the building.

Overhead, the upper floors appear stacked in cantilevered tiers, creating a visual effect that emphasises horizontal lines, which Tan explains is typical of the original architect’s design aesthetic. Tan referenced this aesthetic when he created the thin horizontal brass strip that runs along all four walls of the concourse, level with the lintels of the door openings.

In the centre of the concourse, a massive cantilevered white concrete and marble staircase leads to the basement. Special waiver was sought to preserve it, as the height of the handrails would not meet current building code.

At the far end of the concourse, 2 walls in original white ceramic tile slope down through narrow voids to the basement below. The voids, likely added for air and light circulation, had been sealed over during previous renovations, but Tan reopened the space and installed sculptural light installations above them. Tidy rows of wires dangling naked bulbs at various lengths, some continuing straight through to the basement, draw the eye to the spaces without overpowering them.

The ceiling in the main auditorium was of interest, with curious 70s-style curved details that Tan describes as almost marine in appearance. To update the acoustics of the great hall, he chose a wall treatment that referenced the original dark wood walls that flank the stage, creating a herringbone-like texture of wooden planks. A wainscot in matching dark wood covers the lower portion of the walls, providing a further design connection between the stage and hall.

Over the years, every square foot of usable space was sectioned off for office rentals. Glass windows that overlooked the atrium lobby were boarded up. A recessed terrace with stunning views was closed off. Now, the spaces have been stripped back to their original bones and the upper levels reveal airy open spaces and wide corridors illuminated by natural light that streams in through restored windows.

In updating spaces for contemporary use, such as breakout rooms and meeting spaces, Tan retained the spirit of the building through décor motifs. Hexagons are instantly noticeable, adorning walls, carpets and glass panels. “If you look at the outside of the building,” he says, “you’ll see that it’s actually shaped like two elongated hexagons, so we replicated that.” 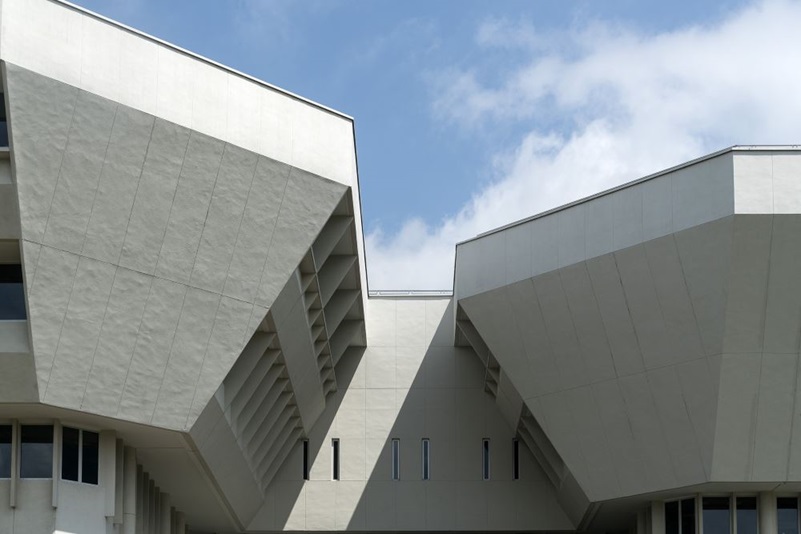 These spaces are also where he has introduced color: brass, chrome, shades of lime, orange and other earthy tones that provide subtle winks to the building’s 70s roots. The maritime theme is continued in the rounded corner detail, or ‘fillet’, of the internal doorways, a style that was popular in the 1970s. 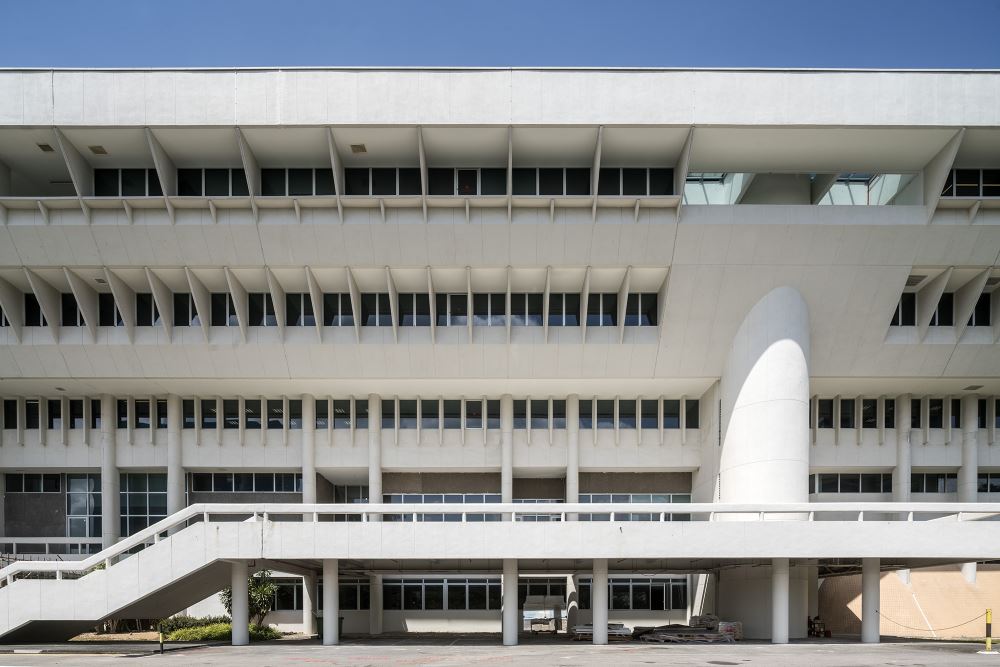 Jurong Town Hall is among the 7 national monuments built after World War II. According to the National Heritage Board, the building was gazetted as a monument because of its national significance, being built during Singapore’s early years of industrialisation and was the work of a pioneering group of local architects.

The building is also part of Singapore’s modern architecture that reflect the gradual awakenings and aspirations of nation-building after 1945. Through careful balancing of land use needs and in consultation with the Conservation Advisory Panel and other stakeholders and communities, a significant number of modern buildings have been protected over the years. These were presented in URA’s exhibition, ‘Heritage of our modern past’ to celebrate their value and importance to Singapore’s built heritage. The exhibition was on display at the Singapore Heritage Festival in 2017 and 2018.

This article was first published in Skyline issue 9.